3D real-time warship girl mobile game "Blue Oath" got an official launch at iOS & Android platform 11:00 a.m. The "Blue Oath" invited top artists, top voice actresses of Japan, well-known drama writers and many composers to work together for the game. Players will become commanders in the game, leading warship girls to fight against enemies coming across the portal on the blue sea battlefield. Now you can download the game by landing on the official website, App Store and all Android app stores.

Massive open beta activities, generous benefits not to be missed

At the time of the open beta of "Blue Oath," we prepared rich activities for commanders. There are recommendation letter x10 once you complete the tutorial , which you can use to explore your dreamt warship girls. New commander special offer that first 20 times to explore, there must be a SSR warship girl as guarantee. Cumulative login the game 2/7/14 days you can get the SSR“HMS War spite”，SSR “Kaga”, costume coupons accordingly. Abundant supplies assistant commanders’ blue journey.

The "Blue Oaths" mobile game assembled a team of Chinese and Japanese top artists to create nearly 100 vivid characters and images. All of character models have been supervised by Japanese first-class toy models stylists. Each of the warship girl has dozens of limb-triggered movements and facial expressions. Each girl’s details, such as the luster of the hair and the fluttering of the clothes are all best to be perfect.

The "Blue Oath" contains four types of warship, they are aircraft carriers, destroyers, battleships and cruisers. Players can configure ideal fleets freely and the arrays are free to switch with single vertical arrays, complex vertical arrays, wheel arrays, trapezoidal arrays, single horizontal arrays and others. The war fog system in battle makes the position of both sides unpredictable. It is especially important to control the route and speed carefully and option to attack or dodge reasonably. Player needs to make an immediate command deployment after judging the battle situation, and use the magical plan to control the overall.

Players need to use free-course steering in combat, and select the most accurate route to complete the attack and dodge operation, and seize the T-term favorable time to give the enemy ship a fatal blow. In the game there are four composite strike systems: aircraft carrier, main gun, auxiliary gun and torpedo, which makes the operating environment more complex, varied and interesting, and tests players’ operational ability.

Each of the warship girls in the "Blue Oath" mobile game has exclusive skill movements in the battle, and full of unique charm. During the battle, the performance-level lens mirror was used. And the special effects such as the take-off of the ship-borne aircraft, the bursting main gun volley and the torpedo trailing trajectory commensurate with the battle of girls were all displayed in multiple shots, ornamental and competitive.

In the game, players will get along with the girls, and fight through the difficulties. Interact and communicate with each other romantically. Form the most sincere oaths in the blue ocean. Login the game to receive the intimate greetings of the secretary ship, sweet touch at your fingertips. Build the Pearl base together with the girls, plan a warm and comfortable home for them.

join together to figure it out, full storyline dubbing. Sound cooperation with Nana Kondo, ‎Kayano Ai, ‎Tomatsu Haruka, Yui Ogura, Koshimizu Ami and many other well-known CVs, they gave the warship girls rich emotions. Yoshiaki Fujisawa, Akiyuki Tateyama, Okawa Shigenobu, S.Fukuhiro, SHIKI, and Moriwaki masatoshi, who create the game soundtrack, are all well-known composers in the industry.  And they use music to light every moment in the game. 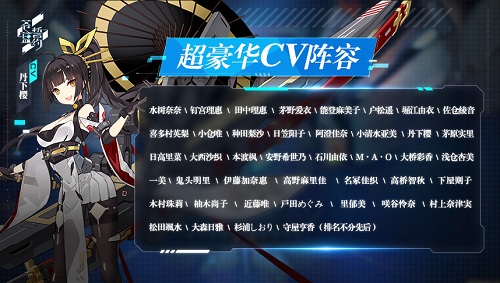 "Blue Oath" mobile game launched open beta at All-Platform today. Login the official website to receive pre-order reward of a SSR girl! The encounter with the destiny of 3D Warrior warship girl began, and the war of guarding the homeland was launched at a glance. Come to the "Blue Oath" to start your journey to the blue ocean!